You went to 3 DisneyParks in 1 Day. Not to shabby for three kids under 7. We started our last Disney day at Epcot, spent an hour or so in Animal Kingdom before wrapping the night up at Magic Kingdom for extra magic hours.

One of the reasons we made the switch to the Wilderness Lodge hotel was of how convenient it was supposed to be with transportation. Well it didn’t work out so well for us.

Similar to the other days, the plan was to get up early and get to the park just as it was opening. Since Epcot has tiered FastPasses, I had a FastPass to Frozen, but not TestTrack, so I was planning to go straight to TestTrack and ride before the line got too long.

We left around 8:15, about 15 min later than I was hoping. First, we took a boat from the lodge to the Magic Kingdom area, where we then took a monarail to the transportation center, making a pit stop at the Contemporary as the express wasn’t running. Once we were at the Transportation center, our plan was to jump on another monarail to go to Epcot. Well that monarail wasn’t running either, so we had to get on a bus. All this took much longer than expected so instead of getting there at 9, when it opened, it was closer to 10, which meant the line for Test Track was much longer.

Additionally, when we arrived we discovered we had a broken stroller, Test Track, was down and Frozen was down so we went to stand in the hour line to meet Anna and Elsa. It was by far the longest time we waited for anything, close to an hour. But the girls were thrilled to meet the princesses. Daddy and Wiliam worked on fixing the stroller and William even scored some fast passes for being such a good helper to Daddy.

By the time we got through the line to meet Anna and Elsa, the Frozen ride was back up and running and we used our 11:00 FastPass to jump through the lines. This ride is super cute and low key and I loved that our whole family could sit in one row of the boat. When we were done with the frozen ride at about 11:30, and the world showcase was starting to open so we began our journey to very quickly skim the world. You kids did not have the patience for mom and dad to fully enjoy it. It also happened to be the first day of the Flower and Garden Festival so we spent time looking at all the amazing topiaries, which I adored. They smelled amazing and it was fascinating to see how they created characters from different kinds of flowers. 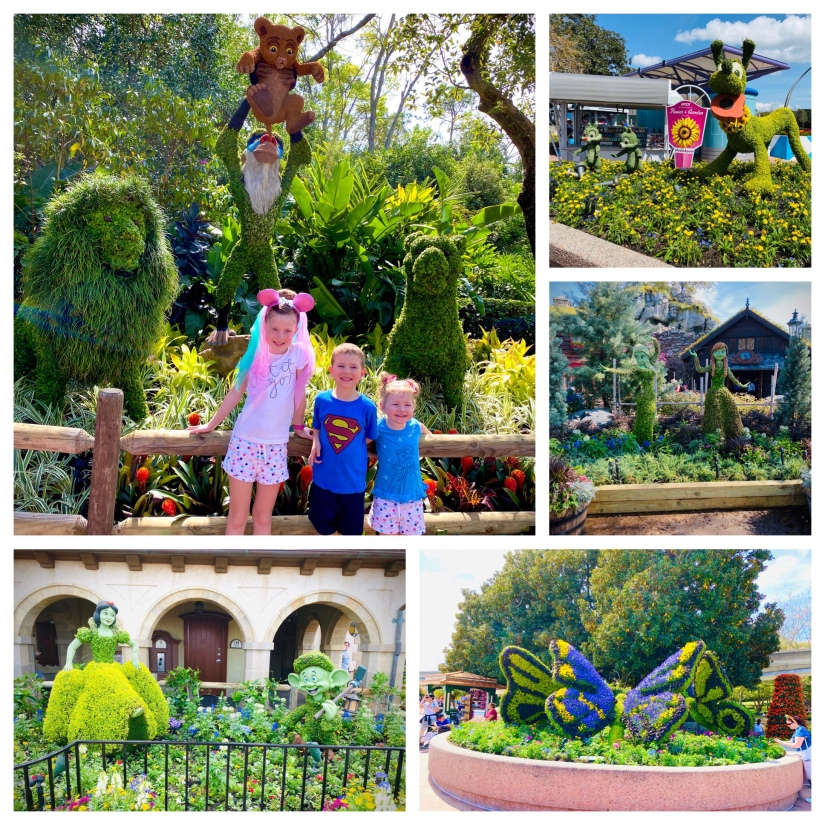 About half-way around, we stopped to meet Jasmine, which was a princess we hadn’t met before. Similar to meeting Daisy, these pictures are brought to you by a dum-dum sucker bribe for Kate.

By the time we were done seeing the showcase, the crowds were really starting to build and our fast pass for mission space was about to run out so Daddy took William and Lexi on that. You guys went on the Orange mission space ride, which Daddy said was pretty scary for both him and Lexi–but William seemed to think it was pretty cool. Go figure? In the meantime, I took Kate over to check out the aquarium and the Finding Nemo ride. Of course Kate feel asleep on the way over there so I explored the aquarium, the Journey to Imagination and ImageWorks by myself with a sleeping baby. 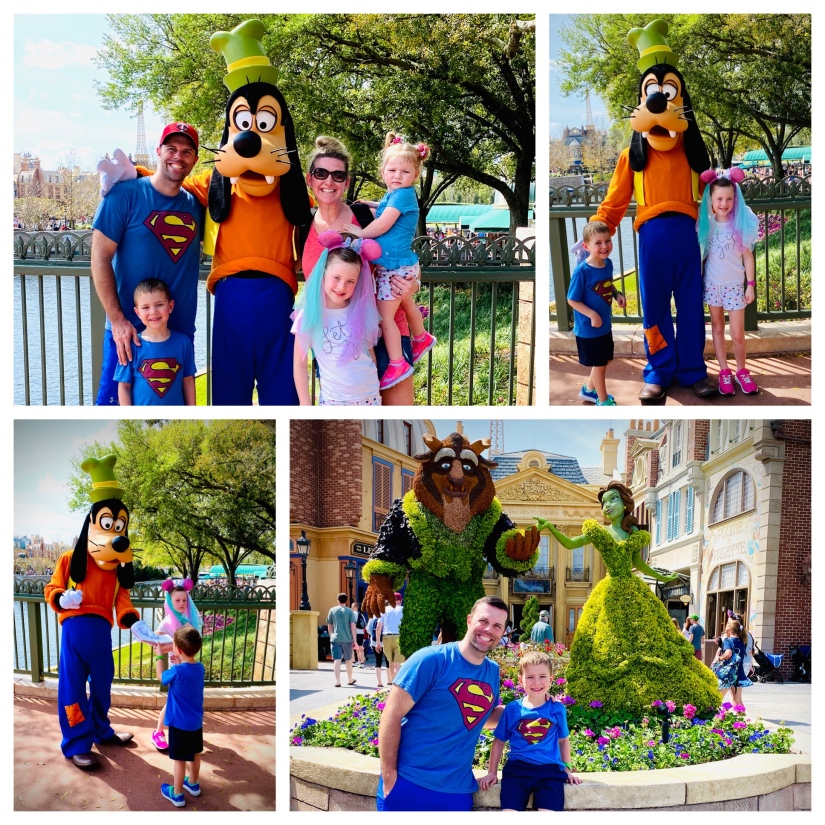 Test Track was back up and running by the time you were done with Mission Space, so Daddy, Lexi and William headed over to ride it. Unfortunately, the ride broke which extended the wait time, but they got it up and running again quickly. You guys went all the way through building your car and were about to test your car and it broke and they shut it down again for the 3rd time that day. We did get some extra fastpasses out of the deal to use at any park on any ride (with the exception of the big rides–Flight of passage, Slinky Dog, StarWars, Seven Dwarfs).

It was about 2:00 at this point, everyone was hungry and the heat was starting to take a toll. We decided to head back to the hotel for a swim instead of exploring any more of Epcot. We stopped at the gift shop on our way out and you each picked out your souvenir. Lexi and Kate picked out Anna and Elsa doll toys and William got a real Buz Lightyear.

One the way back to the Wilderness, we debated our next steps and the roller coaster junkie was begging to ride Everest at Animal Kingdom. So we booked a FastPass for 7:00 and one for the Dinosaur ride at 6:10 and were going to use our bonus FastPass and the Navi’s River, which always has a long line and one we didn’t get to ride last year.

It was about 4:00 by the time we arrived back at Wilderness. We quickly ate some food and Mom and the kids went swimming while Daddy napped. They had a super cute mini waterpark for little kids with a few slides and then had a bigger waterslide in the big pool. Lexi and William loved the big-kid slide and just kept going down it over and over again while Kate enjoyed watching them and kicking and splashing in the pool with me. After a quick 45 minute swim, we headed back up to get changed and head over to Animal Kingdom,

We waited over 45 min for a bus so instead of getting to the park at 6:00 like we thought, we got there at 7:15, 45 min before it was supposed to close. We took a quick family pic in front of the tree of life, lite up at night and then high-tailed it to Everest. 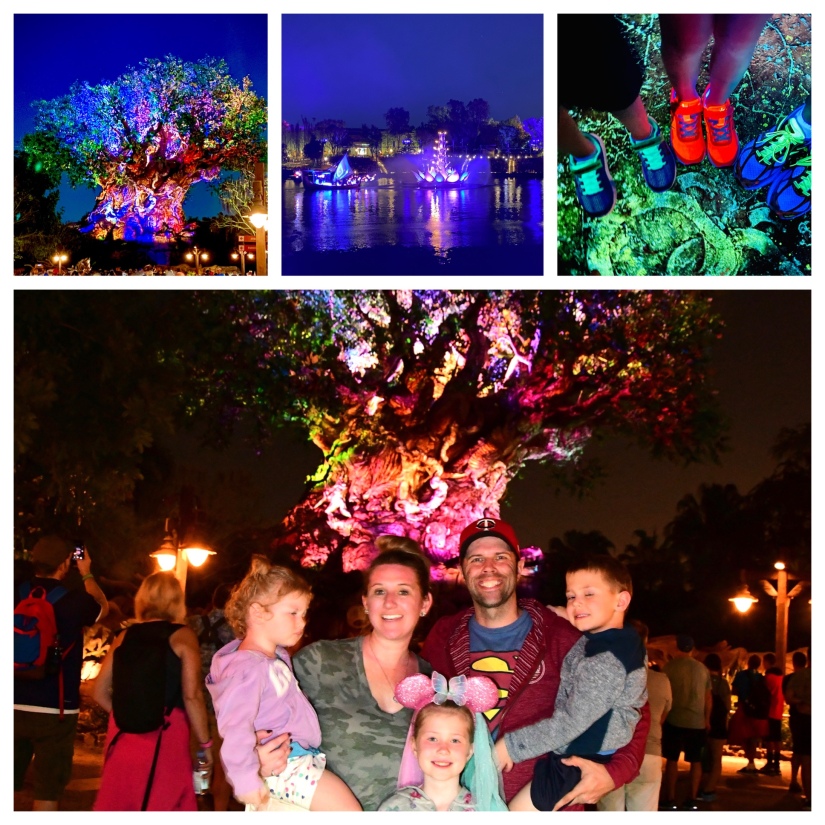 We got to Everest just as River of Lights was ending. Daddy and Lexi used their FastPass and then Mommy and Lexi went. Lexi was just beaming and loves this ride so much. She was so proud to have ridden it at night in the dark.

We had to skip the dinosaur ride since it took so long to get there and Bill thought we should skip the Navai’i River as there was no way we could make it from Everest to Pandora in 9 minutes. Challenge accepted. I turned on my good old speed walking pace and we arrived there at 7:55. We were the second to last people they let on the ride. The Navi’s River is a super mellow ride through a little river–what makes it cools is the entire ride is dark but glows with black lights. The whole land of Pandora is just amazing. I wish we hadn’t been in such a rush and could have enjoyed it a bit more–especially at night. They have black lights everywhere and the sidewalks and trees are lite up to create this super cool environment.

By 8:30, we were on a bus to Magic Kingdom to soak up our last few hours with Extra Magic hours.You kids were starting to get tired, so I gave you a few suckers to give you a little sugar kick and keep you awake.

Daddy and Lexi headed over to Space Mountain while Mommy, Kate and William went on Winnie the Pooh–another favorite ride. After the ride was over, I knew we had pushed as far as we could with the two littles. They were tired and crabby. We grabbed some ice cream as we walked over to space mountain to wait for Daddy and Lexi. We did a quick rider switch and Lexi got to go on Space Mountain again with Mommy. Although the ride was pretty fun. I was fairly nervous for my Lexi. We were going pretty fast, couldn’t see anything and I was worried about her head bobbling around to much and getting some whip lash. 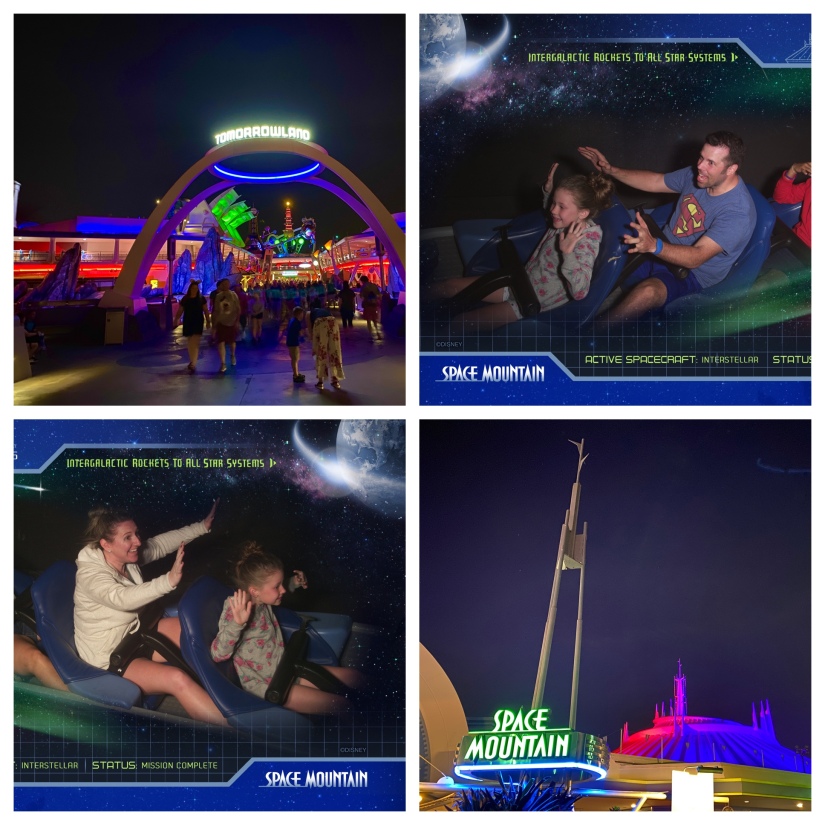 At was just about 11:00 as we walked off the ride. Lexi climbed into the stroller and was sleeping in less than 5 minutes.

What a day! What a trip! What an experience. Daddy and I took our time walking down main street and just enjoying the beautiful way everything is lit up, listening to the chatter of people reminiscing their days and the smell of the home-made chocolate as we walked down Main Street. 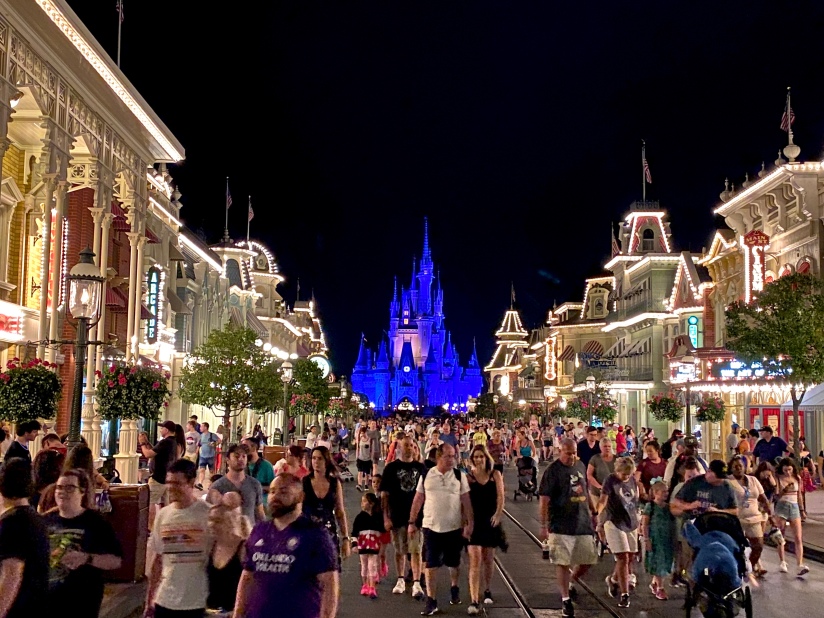 Although we only had 3 days in the parks, we filled them to the brim. We are exhausted and looking forward to the second part of our trip, which should be much more relaxing. But our hearts and our memories are so full. It really was the experience of a lifetime. We have every intention of going back when Kate is older and can go on almost all of the rides and it will be magical then too. There is just this different level of magic, to watch your kids experience this for the first time, the awe from giving characters a hug or having them go on their first roller coaster. It is something I hope to never forget and am so grateful to be able to experience this.