I know you’re pretty young to remember some of this, but this is a moment that will be written into history books and talked about for many years to come. The only other moment in my life that is somewhat comparable to this is 9/11. That was sad and scary–but this one just feels surreal and crazy, at least at this moment (1 weeks in)

We’ll start with the basics of what the heck is going on and then get into how we survived week 1.

First, Covid-19 (also known as Coronavirus) is a virus similar to the flu, but is much more contagious and can have some respiratory challenges. It is most dangerous to the elderly 70+ population. It was first identified in China in January of 2020 and turned their world upside down. Then in late February, early March a few cases were identified in the US, but nobody thought too much of it–at least from my perspective. As the days rolled on, more and more cases were popping up–with the first one in Minnesota in early March. Queue some initial discussion and lots of warnings about washing your hands, not touching your face etc…which basically cleared out hand sanitizer and cleaning wipes from stores. Don’t travel if you don’t have to etc…But for the most part, business was as normal.

Then, on the day we flew home from Florida (March 11), things started to get crazy. This was identified as a pandemic–which is a world-wide crisis (verses just a regional one). The cases in Minnesota grew. Each hour things got a little crazier. Universities started canceling in-person classes and going to virtual only. Major sporting events were canceled (NBA, NHL, MLB, March Madness) DisneyWorld closed (we barely squeaked that one in!) and concerts and conferences were canceled.

On Thursday, my work declared that Tuesday, the 17th, would be a mandatory work from home day to test things out, if we needed to go that direction.

On Friday, March 13th, Lexi came home with a folder of school work to do, in the event that schools close. On my way home from work, I stopped by the grocery store to pick up a few things since our house was empty from vacation. There was very little pasta and pretty much no bread in the stores.

Things kept getting crazier and crazier. The phrase ‘social-distancing’ was introduced, which means they don’t want people within 6 feet of each other and shouldn’t be in groups larger than 25-50 people. With the West Coast schools closing, I had a gut feeling of where things were going, so I headed to Costco 45 min before it opened on Sunday, thinking it might open early and sure enough it did. Outside of chicken and organic ground beef, they had pretty much everything in stock. Toilet paper, paper towels, milk, bread etc…(these items had become scare over the last few days). While there, Auntie Shelia texted saying the Minnesota Governor closed public schools for two weeks, so I added a few more things to the over-flowing cart to make sure we were stocked up. Then, I headed over to Target. The medicine isle was completely empty, no bread, very little pasta and canned goods. I stocked up the best I could, even getting Easter treats in case the stores closed. 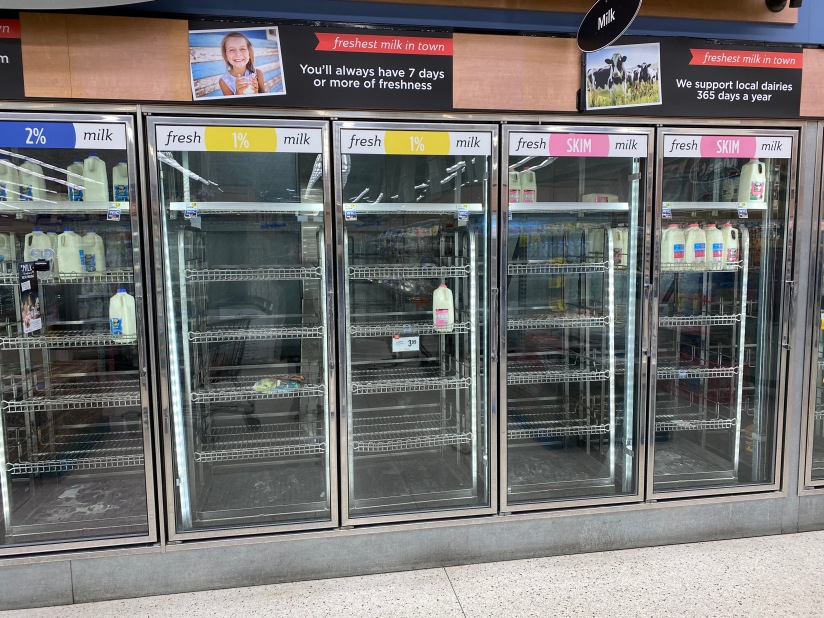 On Monday, I went into work for a video meeting, got my monitor, other supplies and then headed home. I stopped by school to pick up a packet of work for William and we began our time at home, together.

To further explain some of these drastic measures.

This virus is extremely contagious and has a 2% mortality rate, officials are terrified if we don’t take these measures and slow the rate down that people interact with one another and therefore, spread this virus, that too many people will get sick all at the same time and we won’t have enough medical staff, beds, or equipment to take care of people. This exact scenario is happening in Italy, Spain and other European countries. Medical officials are literally having to choose who lives and who dies. It is terrible. Medical and government officials are trying to prevent that from happening here. The challenge is, everyone has an opinion. Many of these people are credentialed or at least sound like it and it is really hard to decipher what is going on. You can find a credentialed person to support whatever you want, which makes it challenging to know what the right thing to do is.