After living in our house for a good year or so the hubby and I decided it was time to paint the living room/entry way of our house. At the time, the walls just had the construction paint on them which was a pretty boring color and they would get black smudge marks every time you touched them. Typically, I am the painter between the two of us, (I have a bit more patience for the tedious trim work) but we had this one little issue with the ceilings being 25 feet high, and having a staircase to go around! And me climbing up on a ladder extended to it’s full height was just not going to work so it was a joint effort project!

The ever important color selection

With other rooms in the house, we’ve been a bit more daring with color (we have more than 15 different colors!) but considering the 25 foot ceilings I knew I was only going to paint this room once and it needed to be a neutral color for resale, and anything else may be a bit too loud for such a large room. With that said, picking a neutral color is still not an easy task, I swear there are more than 200 different browns, creams, tans etc… and I probably had at least 50 of them at one point. The room was currently a creamy beige color and it was just a little to blah for me so that helped eliminate a lot of the colors. I also knew I wanted a really warm feeling in the room, so anything that had any hints of blue or green were out. Naturally I’m drawn to deeper and darker colors, and knew that I would be safe going a little bit darker because the room was so large it wouldn’t feel closed in. Eventually we landed on what I describe as a coco brown (exact color is Sherwin Williams Tiki Hut)

So if you’re wondering how the heck did you paint 25 foot ceilings, you’re not the only one. Almost everyone who comes over asks us. Thankfully, the hubby and I work well together and we developed a little process that worked and didn’t require us renting scaffolding. I painted all of the floor and doorway trim work and the ceilings that were accessible by a step ladder. Then, I began rolling as much wall as I could reach from standing on the floor. Somewhere in the process, the hubby brought in the extension ladder and began doing the trim work around the ceilings in the areas that I couldn’t reach. When he was ready to begin rolling the top parts of the walls, we screwed our broom handling into the bottom of the paint roller (which already had 2 extension handles on it–classy, I know!)I stayed on the floor and would roll the paint on and carefully extend the roller up to the hubby and he would roll away. We continued to repeat this process 100+ times. Slowly we moved ourselves across the room until we were left with two squares on the wall that the ladder was leaning against. They were up about 15 in the air so we brought in a traditional ladder and rolled the two final spots. And then we repeated the WHOLE process all over again for coat number two! Enjoy a few pics of the process:

Oh and it was blizzarding outside 🙂 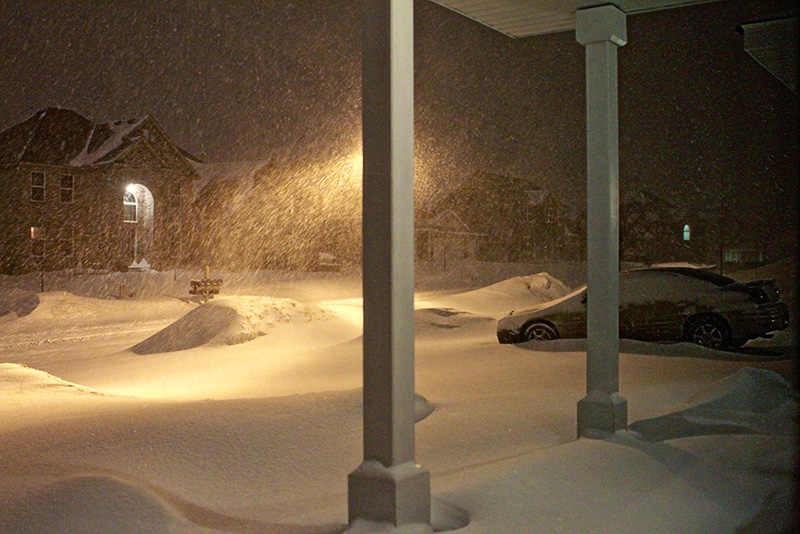