Congratulations my sweet bug, you are a big sister! You’re just over a month into your new role and absolutely adore that little brother of yours (as we all do!). You love to give him kisses and hugs. The hugs are a little rough, but you just want to squeeze all your love into him so we try to remind you just to be gentle instead of yelling at you for being too rough.

You’re constantly asking, “Where’s buddy? What’s buddy doing?” and want to see him first thing in the morning. You’ll often go to his door before mama and dada’s. You also like to get right up in his face. Literally nose to nose and say ‘He’s wooking at you.’ You often ask for him to open his eyes if he is sleeping and like to beep his nose. For the first month, you were just about giving hugs and kisses and looking at him, but around 1 month, you started requesting to hold him.

It is been interesting you watch your reactions to him change over the the past 5 weeks. Your first visit to the hospital, you didn’t give two hoots about him and were much more interested in playing with the buttons on the hospital bed. Subsequent visits to the hospital showed a little more interest as you were asking ‘Who is that? What is she doing’ (you referred to him as a she for the first week 🙂 Then every week or so, you’ve shown more interest in him and now you just can’t get enough.

Although you do know his name, you almost solely refer to him as ‘Buddy’ and will occasionally call him brother. When someone asks you his name you say Buddy. I’ll follow up and say, ‘What’s his other name?’ and you shyly respond, ‘William’.

You love to help mama take care of brother too. You received a ‘Big Sister’ book from Kelly and you love to read it and help me with things they mention in the book, like taking a bath, singing songs to William when he is crying (Twinkle Twinkle, Baa Baa Black Sheep and Rock-a-bye-Baby) and practicing tummy time. Upon completion of your task, you’ll tell me, ‘I help, just like Big Sister book’. 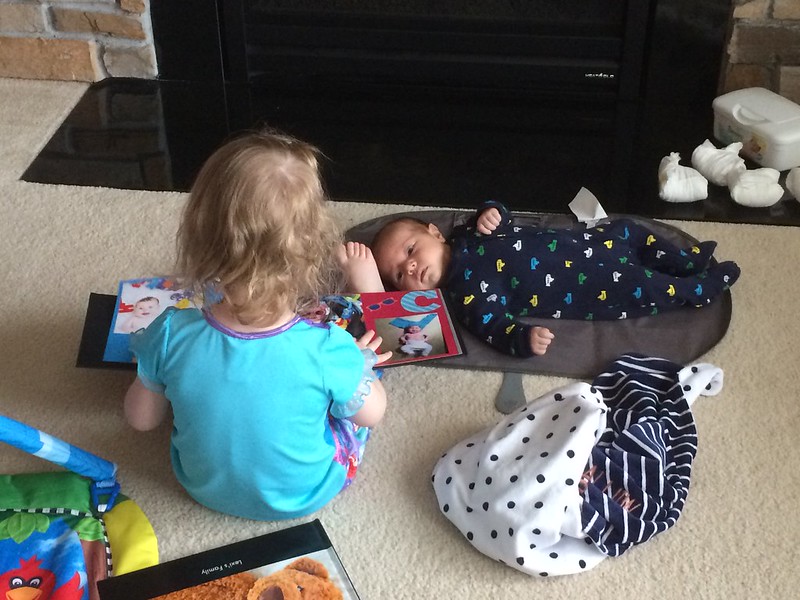 As you’ve watched Mama and Dada care for brother, you increased your nurturing tendencies tenfold. You’ve shown much more interest in your baby dolls and feeding them and naming them (Baby Molly), but most of the time you prefer to take care of Girafee. You love to put him into the swing, strap him into the carseat and often tell us you need to change him. You’ve even taken care of Mrs. Potato head. She fell off the table and you ran to get her, cradled her in your arms and said ‘It’s Ok ‘Tato. It’s Ok.’ as you slowly rocked her back and forth. My heart fell out of my chest when you did this. So sweet. 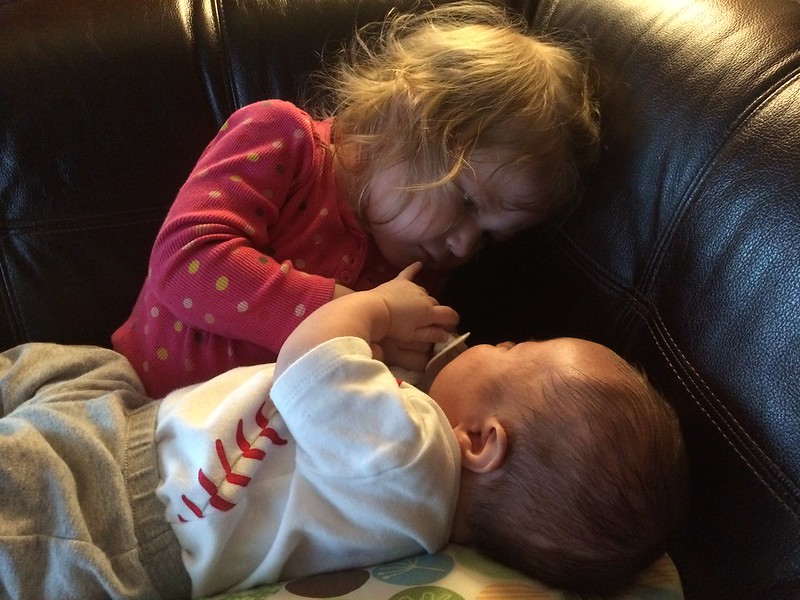 Through all your sweetness, you’ve also shown us some sass, stubbornness and independence. You’re struggling with the lack of attention that Dada and I are able to give you. You’ve had more potty accidents than normal, and just straight up don’t listen. It feels like the lack of listening happens most frequently when I can’t do anything to stop you. Example, I’ll be feeding William on the couch and you’ll climb up on the counter and open the cupboard doors to find yourself a snack. We tried to put you in time out, but you thought it was funny and laughed while you were there, you little stinker! You also love to steel William’s pacifier. I’ll be changing him, and it is sitting on the floor next to me, you’ll come and snatch it up, run away with it as I request to bring it back. It is slightly maddening you little one!

Thankfully, you haven’t made the connection that William is the reason that you have less attention and you haven’t taken your frustrations out on him in any way. Occasionally, you’ll tell me to put him down that he isn’t hungry or he doesn’t need to burp, but for the most part you just love him beyond words.

As a result of your frustrations, I decided to take you out for some special Mommy-Lexi time. We went to a little music class and then to an indoor play ground at the Learn and Play Cafe. You were devastated that William wasn’t coming with us and kept asking where he was.

Mommy is so proud of you sweet girl and how well you have adjusted (are adjusting) to this big transition. You are probably adjusting to this transition better then I am. I love watching your nurturing side come out and hearing you talk to your babies and toys as you take care of them. It is so sweet and just makes me a puddle of mush.