I have been looking forward to this for months. Literally months. I was so excited to get away and enjoy some nice warm vitamin D and forget about routine and work and everything else.

We were scheduled to get out of dodge at 6:40 in the morning on Sunday the 24th. The previous Tuesday/Wednesday, reports of another snowstorm to hit us on Saturday evening into Sunday and just knew it was going to be an issue (We’ve had a large snowstorm at least twice a week this month). I called Southwest several times trying to proactively change our flight to get out sooner to avoid it all. They weren’t having it and said I could only change if I wanted to pay the difference. The challenge was, Southwest only flies to PCB on Saturday and Sundays in Feb, so the next flight there was the following Saturday, which was the day we were supposed to come home.

Sure enough, Saturday rolls around and I get the email that our flight was canceled. I get on the phone and start trying to figure something out. They said we could only fly to Pensacola or PCB, but there were no options, so I asked if we could fly into Orlando…which they said yes. So, we booked to leave at 9:40 on Sunday morning and head to Orlando. Given that we were in Orlando and the following day was William’s 4th Birthday, I wasn’t going to pass on the opportunity to take the Birthday boy to DisneyWorld, so I found an affordable hotel–which happened to be onsite at Disney (Pop Century) and gave us the ability to have Magic Hours and get into the park early, which was a huge win considering we didn’t have any fastpasses. Grammy and Papa also decided to join us on the Disney adventure and each drove a car (theirs and the rented one) 6.5 hours from PCB to Orlando. The situation wasn’t ideal, but at least we were going to get a little something extra out of the inconvenience.

Saturday night, I did some research to learn about Animal Kingdom to have a game plan, but was still very skeptical that our flight was going to take off. And by skeptical–I was a ball of nerves and kind of edgy on to whoever I was talking to.

We ended up getting about 1-2″ of snow that evening and had no challenges in taking off. Kate completely shocked me and feel asleep for a good chuck of the first flight and all was good. 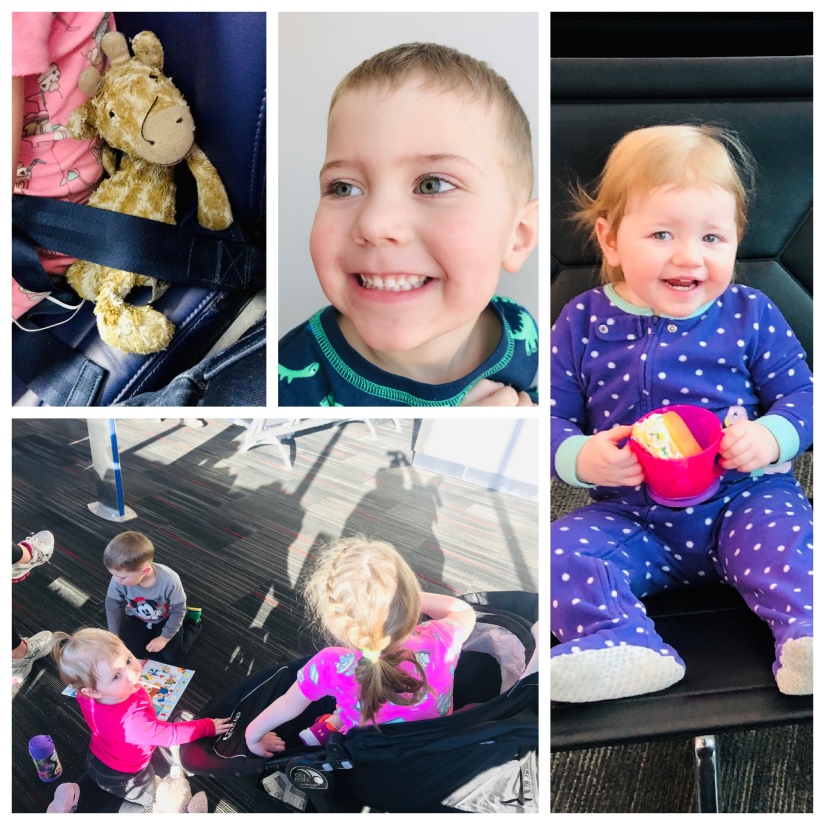 We arrived in Atlanta and grabbed some lunch quick while I figured out the Disney Magical Express. We somehow we misread our tickets or the time hadn’t changed on our phones and when we showed up to board our flight to Orlando, the gate had already closed. AHHH! I was SOOOO mad and frustrated. Still am, a month later. The woman at the gate wasn’t the most helpful and put us on standby to the next flight, which was at 5:30…3 hours from now. Thankfully, another employee herd me complaining and gave us tickets. While we were waiting, Kate pooped twice…which always sucks changing a poopy diaper in public, but twice. Then, William had an incident and pooped his pants a little so Bill was cleaning out his underwear in the sink in the airport. Oh yeah, we were those people. Other than that, the kids were amazing. Amazing. They colored and didn’t complain at all.

Kate was fairly tired, and I spent about an hour and 15 min just walking the terminal with her hoping she would fall asleep in the stroller. No such luck. After a slight delay, our flight took off at 6:00.

Upon arrival in Orlando, we boarded the magical express  and arrived at Pop Century to great greeting from an excited Grammy and Papa.

We eventually arrived in our room around 9:00. We ate some pizza quick, before I headed down to the concierge to get some of our luggage and ticket stuff figured out. After about and hour and a half and two very helpful cast members–I’ve learned a couple of things:

Finally, around 12:30 am, we were back in our room, had all of our luggage. I spent the next hour going through everyone’s bags and pulling out the things we were going to need in the park and re-packing the bags so it could make for an easy departure to the park the following morning.