This is my last quiet week at work and next week it will start to get crazy again. As nice of a break it has been to have quieter days, I’m looking forward to being busier again. It makes the days/weeks go by so much faster, which means, I get to meet you that much sooner! 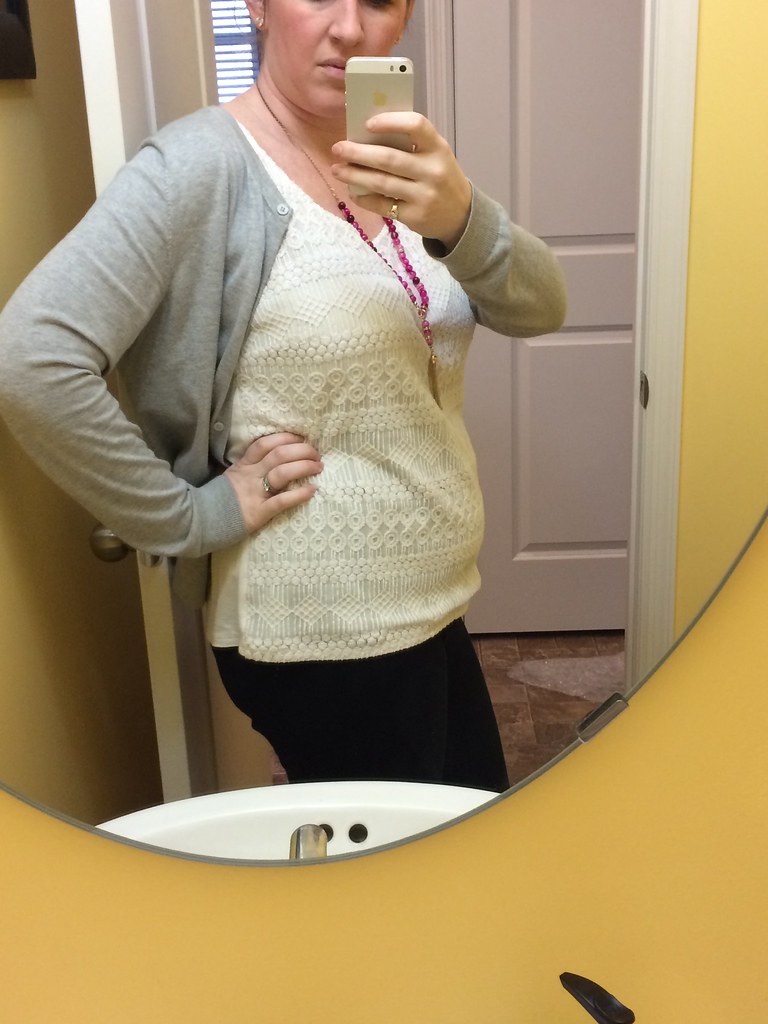 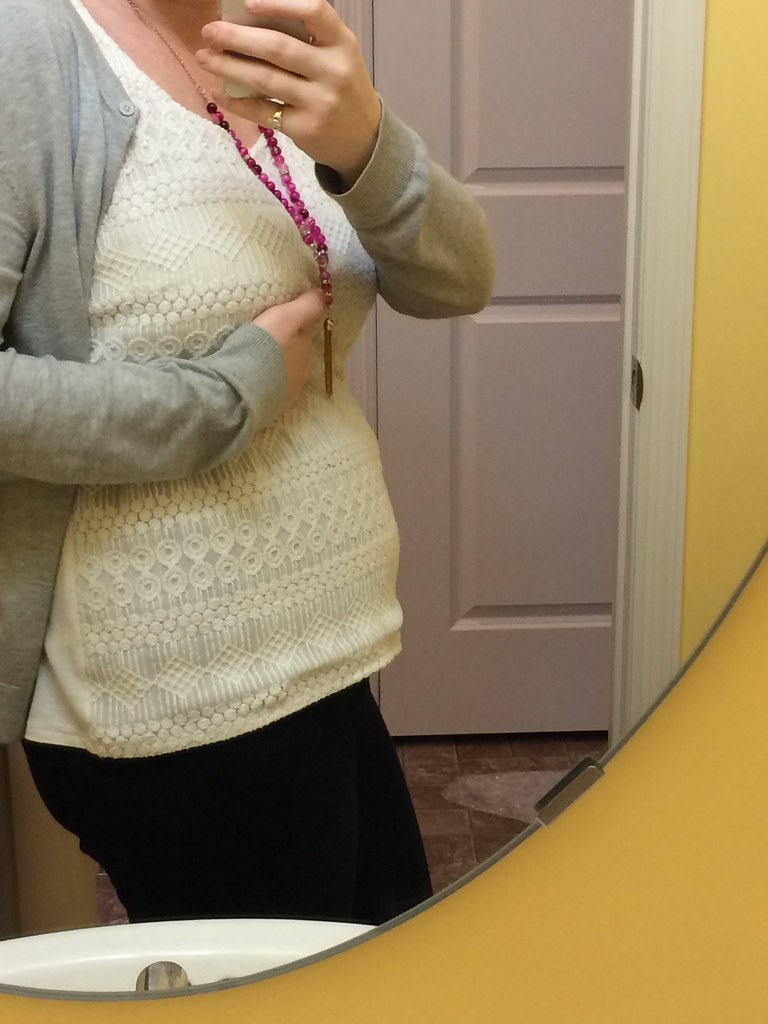 Thoughts on the photo/bump: In these photos, I think it looks pretty small/unnoticeable especially considering I am almost halfway there. However, I really think that is due to the clothes I am wearing. I’ve been intentionally wearing baggier clothes that ‘hide’ the belly as it just looks like I have a big gut and not really pregnant. I’m noticing it is starting to get bigger. I squish it when I’m making food at the counter or putting make-up on in the morning. It also just feels heavier when I’m walking around.

Cravings/aversions: I don’t think I had any major cravings or aversions this week. Pop is tasting much better, which I’m loving! Daddy makes smoothies every morning and those have been spot on, but fill me up. Other than that, just eating because I have to. Could take or leave sweets or salty snacks. Also working on not eating so quickly or as much in one sitting as it is probably contributing to the heart burn.

What I’m anticipating the most: The ultrasound next week! I always really enjoy going to my Dr. appointments, in my mind they are mini milestones until your arrival and each one down means we’re that much closer to your birthday.

What I’m loving: Movement! It is still pretty faint and infrequent, but enough to feel confident that you are moving around in there and its not just a gas bubble. It isn’t identifiable from the outside, but I’m loving that I can feel you.

I also really enjoy daydreaming about you and what kind of baby will you be. Will you be pretty mellow like you’re big sister, or a handful like your Auntie Sheila. How will William react to having another little one in the house. What will maternity leave look like with a 4, 2-year-old and newborn? I have this dream/vision that it will be so much fun and the two bigger kids will play outside in the sunshine and we’ll go on walks every morning. Somehow I have a feeling this won’t be the case at all and you’re going to come early or have colic or something else I can’t imagine and I’ll be stressed the entire time trying to keep you from crying.

Also, this weekend and next week, we’re supposed to have really nice warm weather (maybe even 60 degrees!!!) which is pretty crazy for mid-February.

Names: Daddy and I haven’t talked one time about what your name will be since we found out you’re a little girl. Strangely, I’m OK with this. As Type A as I can be, I also feel like I’m learning to mellow out a lot more and just go with the flow. I have 4-5 names on my list that I think Daddy likes. My guess is, we’ll wait until you arrive to decide on your name. I like all of the names, but there isn’t one that is jumping out to me more than the others and feel pretty strongly that I just need to see you and bond with you a little before we decide your name.

What I’m missing most: Same as last week–more energy and no more coughing

Differences between pregnancies: No update from Lexi this week. With William, this was the first week I wore a pregnancy shirt (same this time around) and truly felt like I looked pregnant. The belly is getting bigger/rounder, but I’m still feeling just fat and not pregnant. Also with William, we were getting ready to go to Hawaii, which is most definitely not happening this time around and am jealous of that milestone.

How I’m feeling: I feel like this is the same story every week. Blah! Similar to last week, I only threw up once and am gagging over fewer things this week, but am still rocking a pretty good cough and am coughing up a lot of thick (but clear) phlegm. (i know, gross!). Also, heartburn. I don’t remember really bad heartburn with William and even if I did have it, it wasn’t until 30+ weeks. I’ve already had to pop TUMS several times and this time, my heart hurts like a heart attack verses just having a burning feeling in my throat.

Best Moment of the week: Daddy and I went on a double date with Rachel and Jake to the Wild game. So fun to get out with other adults! 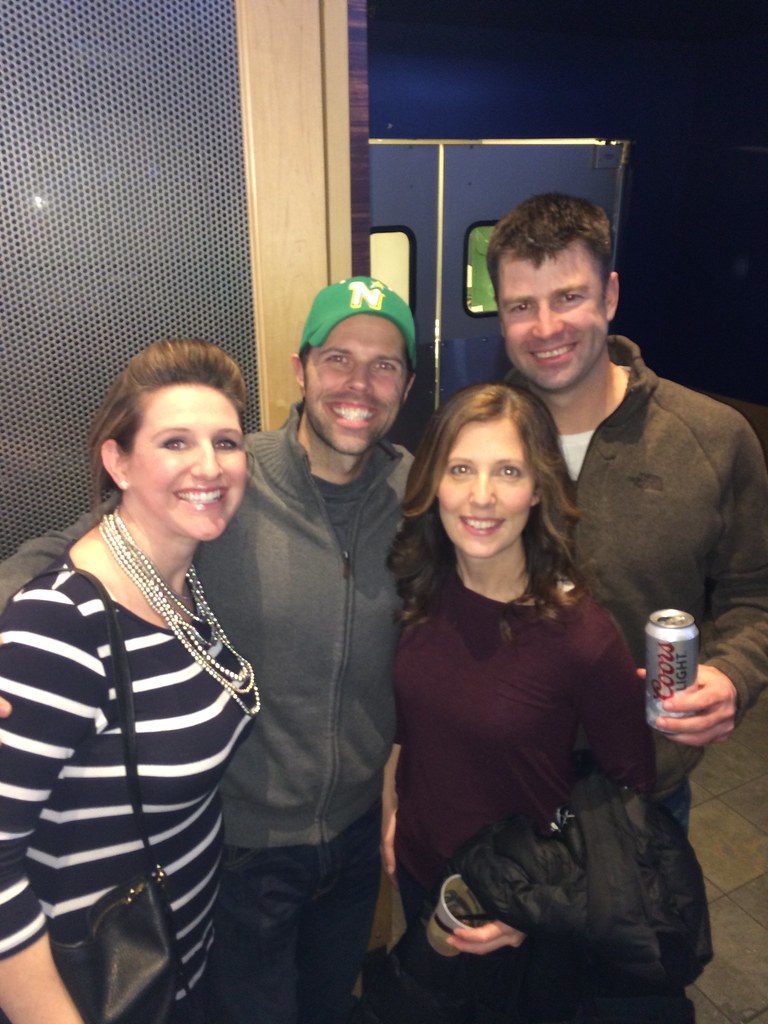